I was born in 1933 in the poorest municipality-even today-of the European Community, Amani, Chios.

I left my village of Volissos at 12 years old to go to High School in Chora (island’s capital). While I was working in Athens, I managed to get 2 degrees, one in Economics from Athens University of Economics and Business and Law from the Aristotle University of Thessaloniki. My first job as a graduate was at IZOLA Accounting. I was selected from among 100 others as the most suitable to become an apprentice programmer in the "computer machine" of IBM.

At the end of the 1950s, with a few collaborators and the same "computer machine" that I asked to take with me leaving IZOLA, without even hearing the word computer science at university, we dared to invest in a completely unknown place, with the minimum technical knowledge we received from IBM. In the 60’s, we founded 14 companies in the field of this new market, the first school of informatics in Greece, we computerized 13 Banks, the Hellenic Banks Association (Tiresias), the Athens Stock Exchange, 5 Insurance Funds, dozens of Municipalities and hundreds of companies. In the 70’s, we went beyond the Greek borders, operating in France, Malta and Saudi Arabia.

My older brother John, after the Civil War, had left in America in order to work. When, he returned for the first time in 1965 with his family to see us, he brought with him a Kodak Brownie 8mm as a gift. For me, that technology had always fascinated me, this machine was in my hands the first "gadget", the one that brought technology close to family, friends and my heart.

In a magical way my 16 films in total, record in some of them and imply in some others the course of mine, of my loved ones and of Greece's itself of all of us.
Films (1) 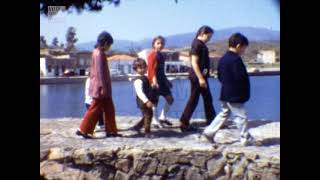 The port at Limnia, Chios

The port at Limnia, Chios